4/8/12 Saturday. Yesterday afternoon I played the easiest nines holes of golf ever in my experience. Not the best, the easiest, not the most fun, the easiest, thatsums up the playability of the complete hybrid set that I now have in the bag. I scored a gross of 41 (5 over par) in the nine holes played with the hybrid set. My first plan when they arrived was to get on the range and hitballs with my six and eight irons and then compare the shots with the equivelent hybrids. 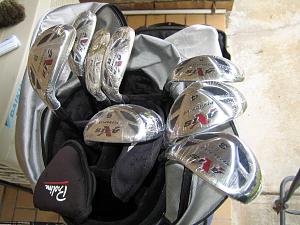 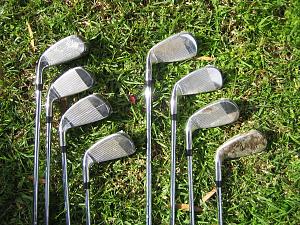 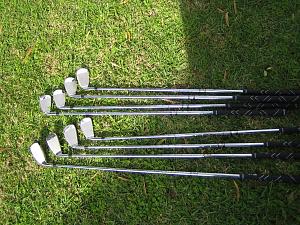 I had no idea what the hybrids would feel like or any expectation of what the effect would be when hitting balls with them. The day was a very hectic one and Ihad a 40 minute window in the early afternoon to get on the practise range without the regular set in the car. No matter I know my distances well enough to get an idea and lined up and started hitting balls. After twenty Iwas not Gobsmacked but totally confused, never has hitting a ball been so easy and the effect so good. Okay the promo for the clubs did say more distance and straighter shots many clubs do. That the ball way scooting 15-20metres longer after impact was a surprise that had me reeling.

If you had practised like I have for almost four years, got to a twelve handicap and tried out most club types getting a five to ten metre increase with new stickswould be more believable. When ten shots with each stick go fifteen to twenty metres longer than usual and effortlessly how surprised would you be? Exactly and my first reaction was to want to get home grab the irons and returnto the range. Instead I took my time finished the weeks tasks and headed out for nine holes. How convinced was I that these clubs were going in the bag? Not 100%, I played the nine holes with the factory plastic still on theclub heads as the pictures show. I was hedging my bets and if they failed the test I was going to sell them in almost pristine condition.

When I got home after the nine holes as soon as the pictures were taken the plastic seal was off and the set is ready for action. I hit #3, #5, #6, #7, #8, #9and PW during the round. The defining moment was a 140m shot to the green with a 7 iron that hit the green and finished on the back edge with a one and a half metre roll. Took the #8 Hybrid out for its first hit then, theball dropped on the green and stopped three metres to the right of the pin. There was a bit of a breeze behind me, even so my usual easy eight iron is 125 metres not 140. There was another follow on effect from the hybriduse and that was the driver off the tee became o easy to accommodate to after playing each hole. The hybrids felt like the Cleveland Tour Launcher (440cc)driver, so light and the swing speed so much faster. As I got used to the hybrids stepping onto the tee and swinging the driver began to benefit from the similarity in feel.
Thankyou for your time and attention. :Hit ‘em straight all”